We Fight for Injured
Workers Because We Care
About Injured WorkersContact Us NowFor a Free Consultation
Home
Attorney Profile
Marla A. Joseph 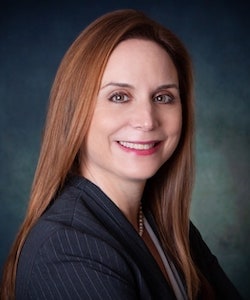 Ms. Joseph, an AV rated lawyer, is the principal and sole shareholder of the Law Offices of Marla Joseph, LLC. For a quarter of a century, she has been fighting for disabled workers, concentrating her practice in workers’ compensation and Social Security disability law. Ms. Joseph earned her B.A. from the Pennsylvania State University in 1991 and her J.D. from Temple University’s Beasley School of Law in 1994, where she was honored with an award for achievement in trial advocacy. The Best Lawyers of America awarded her the 2020 Philadelphia’s Workers’ Compensation Lawyer of the Year.

She is a Board Member of Kids Chance of PA, an organization that awards scholarships to the children of workers who died or suffered catastrophic injuries in a work accident. She was Chair of the Pennsylvania Bar Association (PBA)’s Workers’ Compensation Executive Council from May 2018 to May of 2019 and previously served on its cabinet in multiple positions. During her tenure as Chair, she earned PBA’s Merit of Achievement Award for instituting a silent auction which raised a significant amount of money for Kids Chance of PA. Ms. Joseph was voted by her peers and a Blue Ribbon Panel as one of Pennsylvania’s Top 50 Women Lawyers in Philadelphia Magazine’s 2009 Super Lawyers edition and was voted as a “Super Lawyer” in the field of workers’ compensation in its inaugural year and for well over a decade. She received the 2004 Lawyers on the Fast Track award from The Legal Intelligencer and Pennsylvania Law Weekly. Ms. Joseph frequently lectures on workers’ compensation issues and has planned and moderated seminars for the PBA, Pennsylvania Bar Institute, Pennsylvania Association for Justice and the Bureau of Workers’ Compensation Conference. 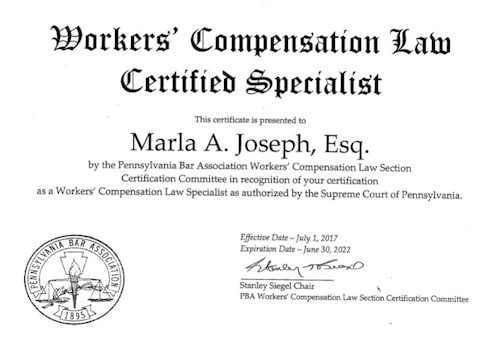 Contact Us Now
Services
Client Reviews
★★★★★
"I had a unique and difficult workers comp case. Everything about my case was stacked against me, including my own doctor! Marla was recommended to me through a local union member. When I called and spoke to her, I knew that she was exactly the right person for me to work with. She was always there for me 100%, even when it looked like my case was sinking; but she never gave up and fought for me until I won my case. She is a very nice woman, extremely fair and honest and very knowledgeable in workers' compensation law. My highest recommendations go to Marla Joseph!" Kathy
★★★★★
"Marla: Thank you for always putting every effort into all of the hard work that you've done for me. Your professionalism is "unmatched" by all standards and I am mostly grateful to call you a friend! You are ALWAYS a professional and ALWAYS my friend. God Bless You and Your Family!" Andrew
★★★★★
"Thank you so much for all your help and understanding throughout Bill's accident and beyond. You are a wonderful person and more than our Attorney, but our friend. Please know we make sure to let anyone that could use your expertise aware that you are the ONLY one to contact as far as we are concerned if they want the best! Thank you again." Kristen
★★★★★
"When I first met with Marla Joseph, I discovered that all of the health problems I had were so much more serious than even I thought. She took my case on, and for the first time in my adult life, I felt that someone, other than my family, understood what my life was like. I was treated with the utmost respect and consideration. All phone calls were promptly returned. All correspondence was generated and followed-up with carbon copies to me. Meetings, doctors' appointments, and hearings were scheduled in a timely manner. Throughout this ordeal, Ms. Joseph always prepared me for important events and I was never alone. Marla was always there for me and believed in me. When an attorney genuinely keeps her clients' well-being and concerns in such a high regard, you know that you have someone very special on your side." Lenesther
VIEW MORE
Submit a Law Firm Client Review